Making our way from Berlin to Gdansk, we decided to stop over in Poznan for the night and wow, what a beautiful city and wonderful introduction to Poland. With little over a half-day in the city, and the looming threat of rain overhead, we headed straight to our hostel from the bus station to drop our bags before exploring the historic town centre (after a brief moment of confusion when we were drop at a different bus station that we had planed, making our map and directions to our hostel all but useless). 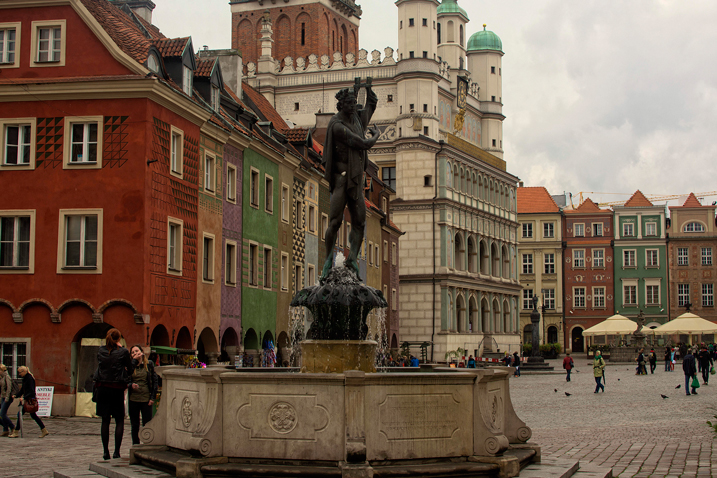 Travis stealing WiFi from the bus in order to figure out how to get to our hostel for the night!

As the birthplace and original capital of the Polish Nation, Poznan is a city with a long and storied history. Although the scars of WWII and 45 years of Communism are less noticeable in the beautifully rebuilt city centre, regarded by many as one of the most beautiful in all of Poland, the outlying areas are still in a state of slow but steady repair.

With only a few hours to explore, we made a conscious decision not to try and see everything and instead focus our visit within two main areas: the historic Old Town and Citadel Park. With this being our first visit to Poland, we weren’t sure what to expect upon arriving in Poznan, and our 4.5 kilometer tram ride from the bus station and the city’s outskirts into downtown made us a bit apprehensive. However, immediately upon entering the Old Town we were blown away by it’s beauty and charm.

Inside the Lesser Basilica of St. Stanislaus

The Basilica and College of St. Stanislaus

First to greet us was the mammoth Lesser Basilica of St. Stanislaus, in all it’s Pepto Bismol pink glory (so big we had to walk two blocks down in order to photograph it from top to bottom). From this “lesser” Basilica, we easily found our way into the main town square Stary Rynek meaning “Old Market Square” and stood in awe for a moment while the realization of how we’d underestimated Poland sunk in. This picturesque square is bordered by beautifully coloured merchants houses while in it’s centre sits the ornate Town Hall, more colourful houses, and four fountains featuring statues of Proserpine, Apollo, Neptune, and Mars. As I was busy snapping photos, Travis had more than enough time to chose a restaurant where we could eat lunch, and did his job well finding a small pub where we enjoyed our first taste of authentic Polish pierogies!

Needing to walk-off our filling lunch we headed to Citadel Park, home to many cemeteries and monuments commemorating different battles fought in the city. Having read whispers of a museum in the park housed in the remains of a Prussian Fort that contained tanks and other war machinery, we explored the park before stumbling onto it atop a small hill marked by a large soviet monument.Although most of the fort itself was taken apart to help with reconstruction efforts around the country, some of it still remains and the grounds are very interesting to walk around.

Travis’ face seemed to light up upon spotting the tanks and although the Armaments museum was closed, we walked around and peered through the fence at the very cool pieces of war history. A number of fighters and bombers (including a MiG-15), a Katyusha Rocket, and numerous tanks and support vehicles are all right there for people to touch and photograph. After getting our fill of remnants of the war we decided to make the short walk back to our hostel and call it a day.

2 Tanks outside the remains of the old citadel

Some Logistics – Wandering around Poznan’s compact town centre is best achieved by foot, and will take at minimum two to three hours. The 89 hectare Citadel Park is located just north of the Old Town and is a great place to spend a couple of hours.

6 Responses to "4 Hours in Poznan"