I couldn’t help myself today. Perhaps the near end of the A to Z Challenge has me overconfident but today we are going to tackle two related yet separate attractions in BC – Vancouver and Victoria’s historic Chinatown neighbourhoods. Both are a huge tourist draw in their respective cities, and home to some of the best restaurants in the area, but which one is best? As it turns out this is a question impossible to answer.

Canada’s largest Chinatown, Vancouver Chinatown is also one of the largest in all of North America. Each year thousands of tourists crowd the neighbourhood’s streets in search of  authentic Chinese restaurants, unique shopping experiences, and the chance to explore the area’s collection of historic heritage buildings.

Tales of life as an early Chinese pioneer in Vancouver bring the area to life for participants of one of the many walking tours through this historic neighbourhood. As one of the earliest communities in BC, thousands of early Chinese immigrants settled in the then named Shanghai Alley between the years 1890 and 1920. Today the neighbourhood is centered around Pender Street, surrounded by Gastown, the downtown financial district, and the downtown eastside.

Tourist attractions of note in the area include the Dr. Sun Yat Sen Classical Chinese Garden, one of Vancouver’s most popular attractions, as well as the China Gate, used in the China Pavilion at Expo ’86, the Chinese Cultural Centre Museum and Archives, and the Jimi Hendrix Shrine –  Housed in a restaurant once owned by the famous musician’s grandmother, Hendrix spent a large portion of his childhood here.

However the biggest draw in Vancouver’s Chinatown neighbourhood is the food. A balance of traditional favorites and exciting modern creations, the area is home to over 35 restaurants, bars, and bakeries. 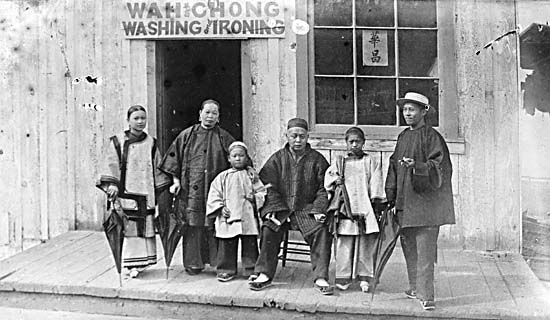 Victoria Chinatown is the oldest in Canada, and while it may not be as large as it’s Vancouver counterpart, it is the second in age in all of North America after San Francisco.

With the 1858 discovery of gold in BC’s Fraser Canyon, a sudden surge of people made their way to BC from California. One third of these immigrants were Chinese. Further famine, drought, and war brought more Chinese immigrants from China across the Pacific to BC.

Victoria’s Chinatown began as a crude collection of wooden huts and rapidly grew into a dense neighbourhood of businesses, theaters, schools, temples, and even a hospital. However it also gained a seedy reputation due to its abundance of opium dens, gambling halls, and brothels. At the neighbourhood’s peak in 1911, Chinatown covered six city blocks and was home to 3,158 residents. This is almost more people as the entire populations of downtown Victoria (including Chinatown) in 2001.

From the 1920s until the 1970s Victoria’s Chinatown was in a state of decline, shrinking dramatically in both size and population. However revitalization efforts began in the 1980s and continue to this day. Located in the 500 and 600 blocks of Fisgar Street, Victoria’s Chinatown is home to the popular Fan Tan Alley, a historic passage only five feet wide, as well as the historic Old Chinese School.

Victoria’s Chinatown neighbourhood was declared a National Historic Site of Canada in 1995. It has also appeared on tentative lists of Canada’s nominations for UNESCO World Heritage Site Status but has yet to be officially nominated. 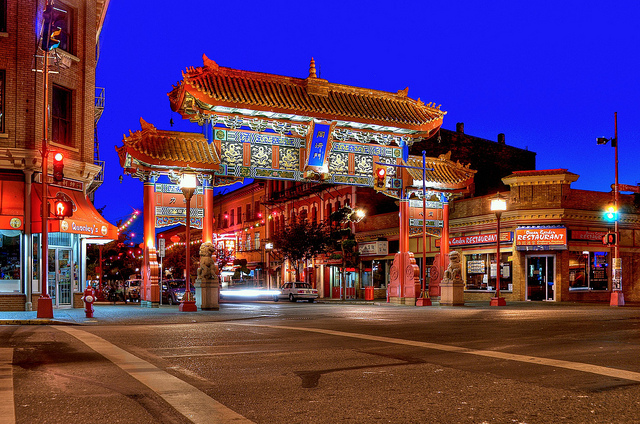 The Gate of Harmonious Interest, or Tong Ji Men, erected 1981 (via)

14 Responses to "Beautiful BC from A to Z: V is for Vancouver & Victoria’s Chinatowns"