After a wonderful walking tour of Budapest’s main highlights on our first day, we were ready for more and set out on our second day to see some more of the city’s many amazing sites. In addition, we were searching for some of the hearty Hungarian food the city is known for.

Our day started with a walk down Andrassy Avenue, Budapest’s version of the Champs Elysees, and one of its oldest shopping streets dating all the way back to 1872. Dotted with beautifully restored buildings, fancy shops, and countless trees, it is a perfect place for people watching. On this particular morning, we were treated to some kind of marathon or relay race – from young children to seniors, thousands of people were participating and even more were watching and cheering them on. 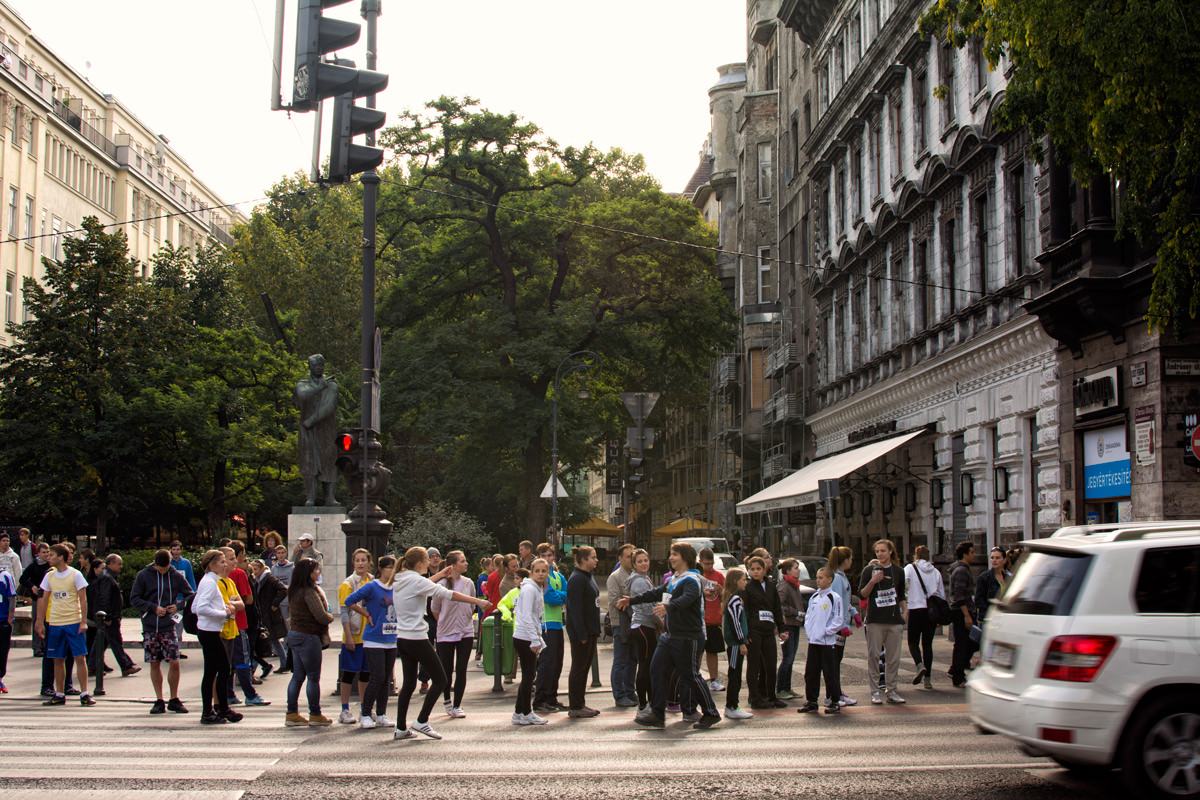 Participants celebrate their handoffs in the relay race 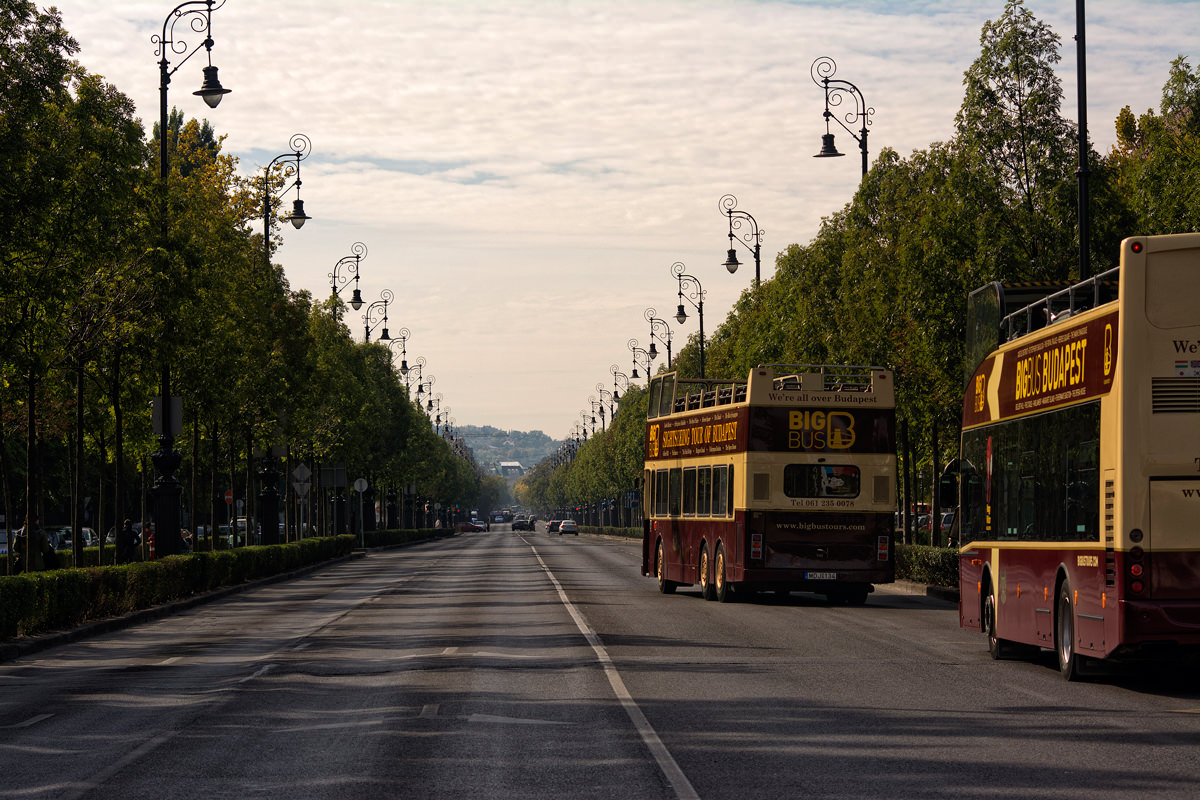 Andrassy Avenue leads to some of Budapest’s most popular spots to hangout. Bordered by the Jewish District and its cool eateries and pubs, you can also find the best museum in the city (The House of Terror), the backpacker hub at the Oktogon, and some of the most exquisite old apartment buildings in the city at the Kodaly Circus. 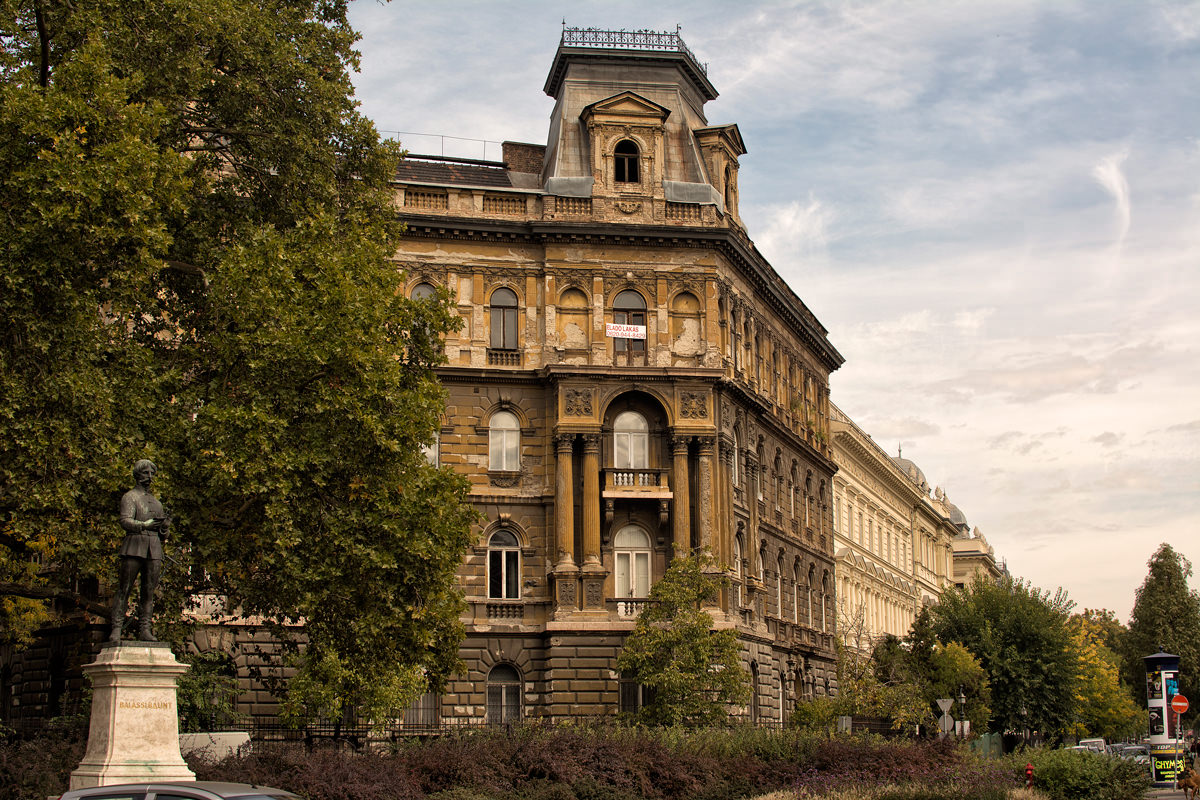 Just one of the beautiful buildings found on the Kodaly Circus

Andrassy Avenue ends at one of the city’s most popular spots for a relaxing day, the city park. Built for the Millennial Celebration in 1896, the park is a wonderfully relaxing place to spend an afternoon walking down its many paths, admiring the spectacular Vajdanhuyad Castle and its strange blending of architectural styles, and maybe even taking a dip in the famous Szechenyi Baths. If you are too tired, you can even take the “Millennium Line”, Continental Europe’s first underground system, back to the city center. 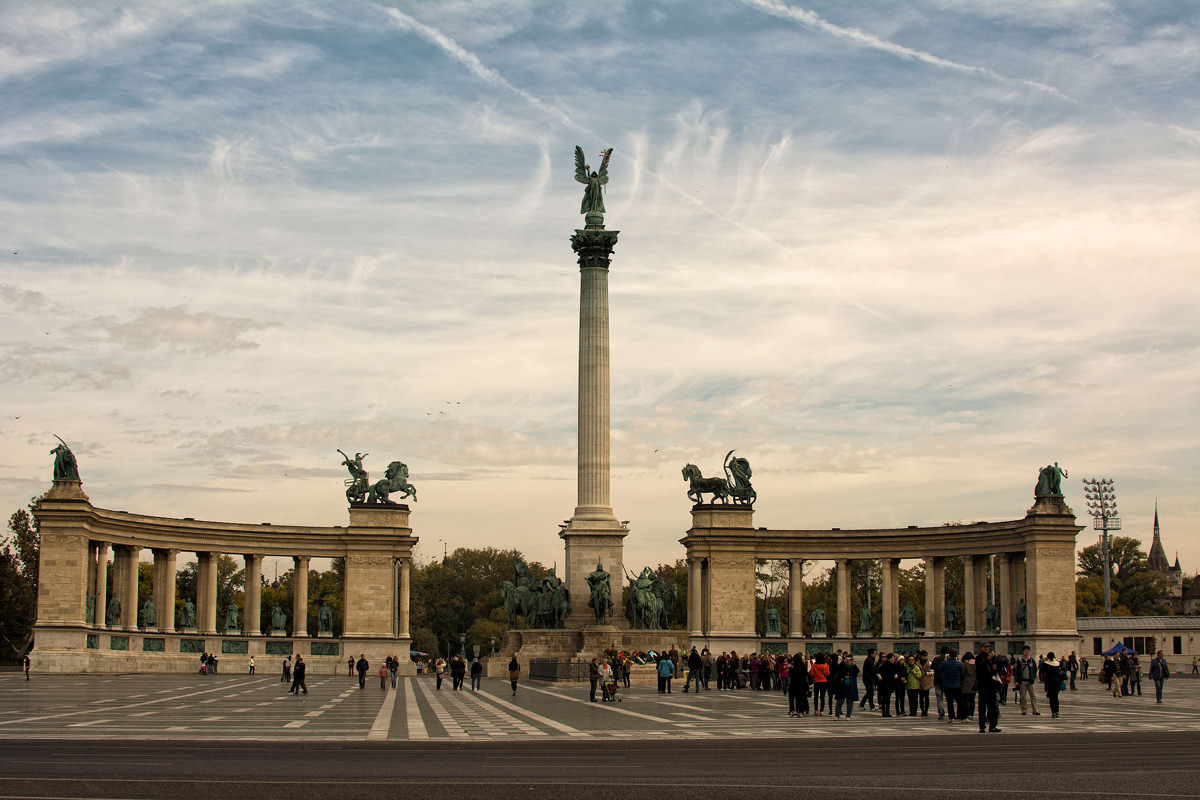 Heroes Square at the entrance to the City Park – you can see some of the people still hanging around from the race. 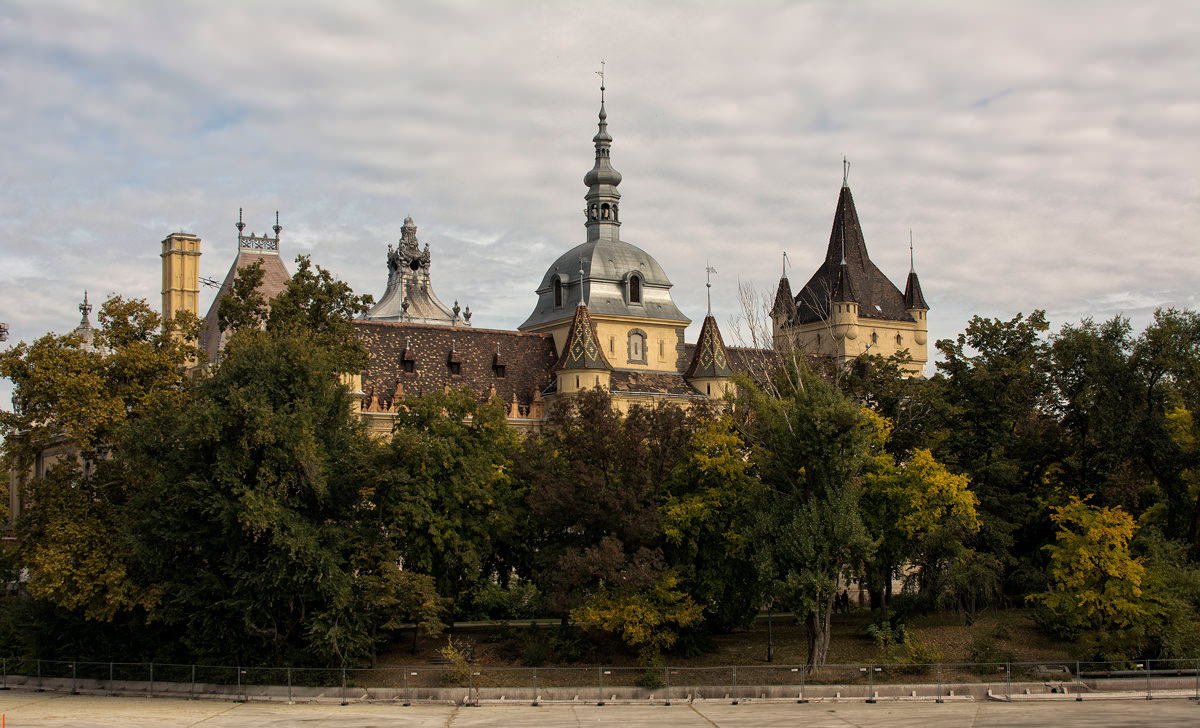 We, however, were not tired – in fact, we were just getting started. After stopping for some traditional Hungarian fare of Gulyas and assorted deep-fried meats at a local canteen-style eatery, we were rejuvenated and decided to spend the next few hours winding our way through the Jewish District of Budapest. 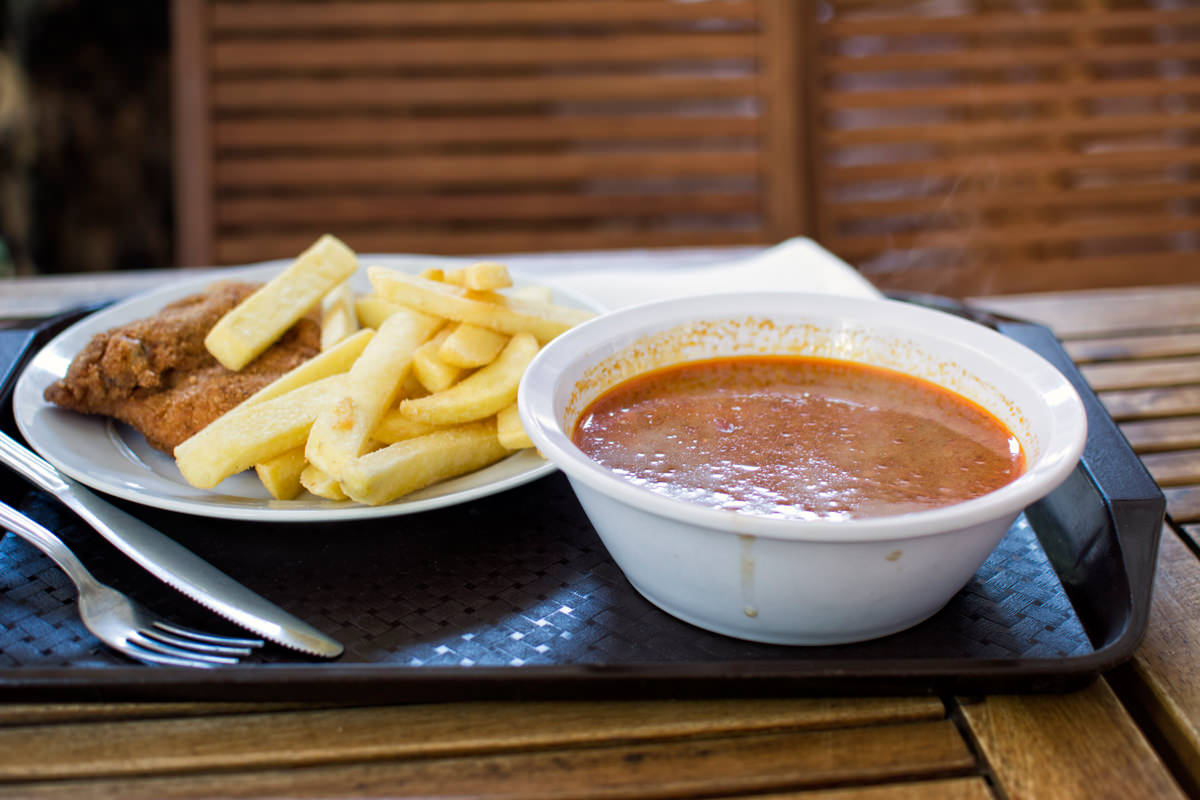 Some nice warm Gulyas and assorted fried goods to refuel us

Recommended by our tour guide as one of Budapest’s most interesting neighborhoods, it is definitely the best place to go for a party. And it is the place where you can find Budapest’s coolest trend – ruin pubs. Set up in derelict buildings throughout the Jewish District, these hipster havens are the epitome of cool. To find out what all the hype was about, we decided to venture into Szimpla, arguably the most famous ruin pub in the city. 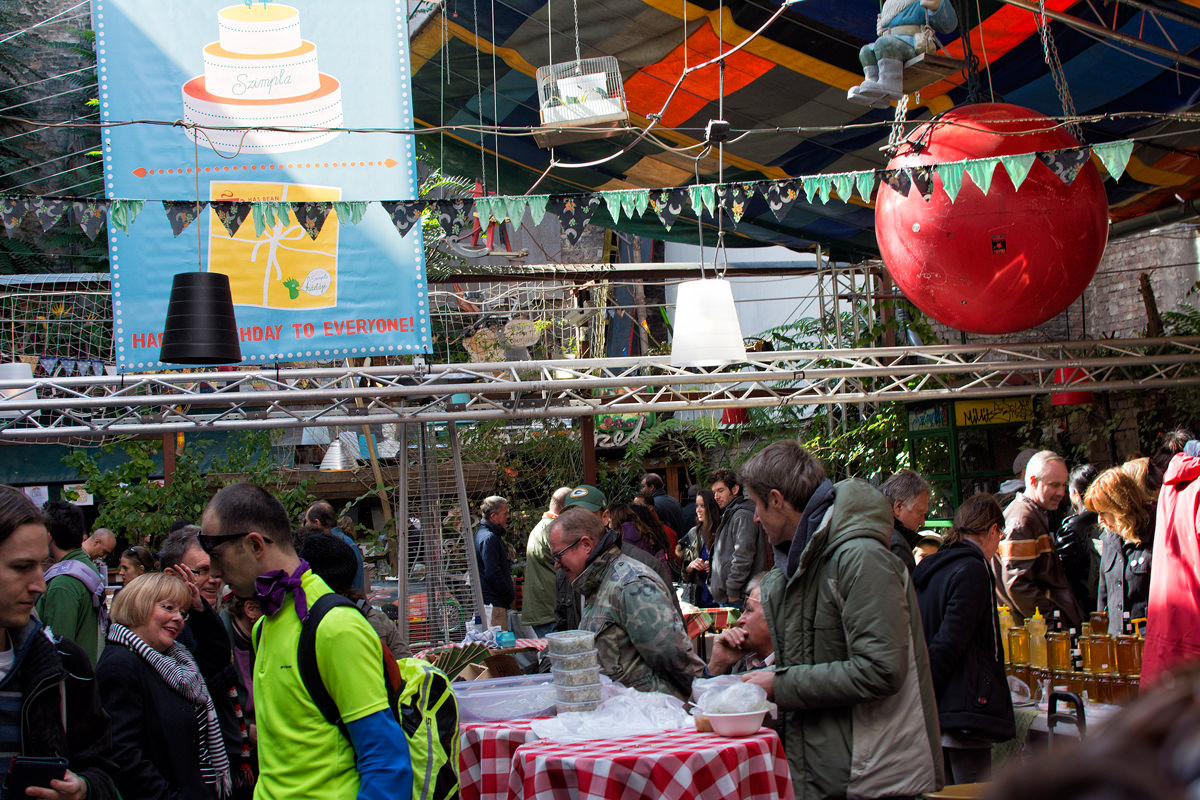 The farmer’s market at Szimpla

It was definitely different than any pub we have ever been to in Canada – it looked like someone had put a yard sale and a collection of paint cans in an atomic bomb and then set it off. Furniture on the roof, a car in the middle of the floor, graffiti everywhere – it seemed to be designed with such abandon that everything looked like it was arranged perfectly.

Probably the coolest thing about our visit to Szimpla was that it was Sunday, which means that for a while it was not solely a bar, but rather a trendy farmer’s and food market, complete with people playing guitars and giving out samples of wild meats and curious cheeses. 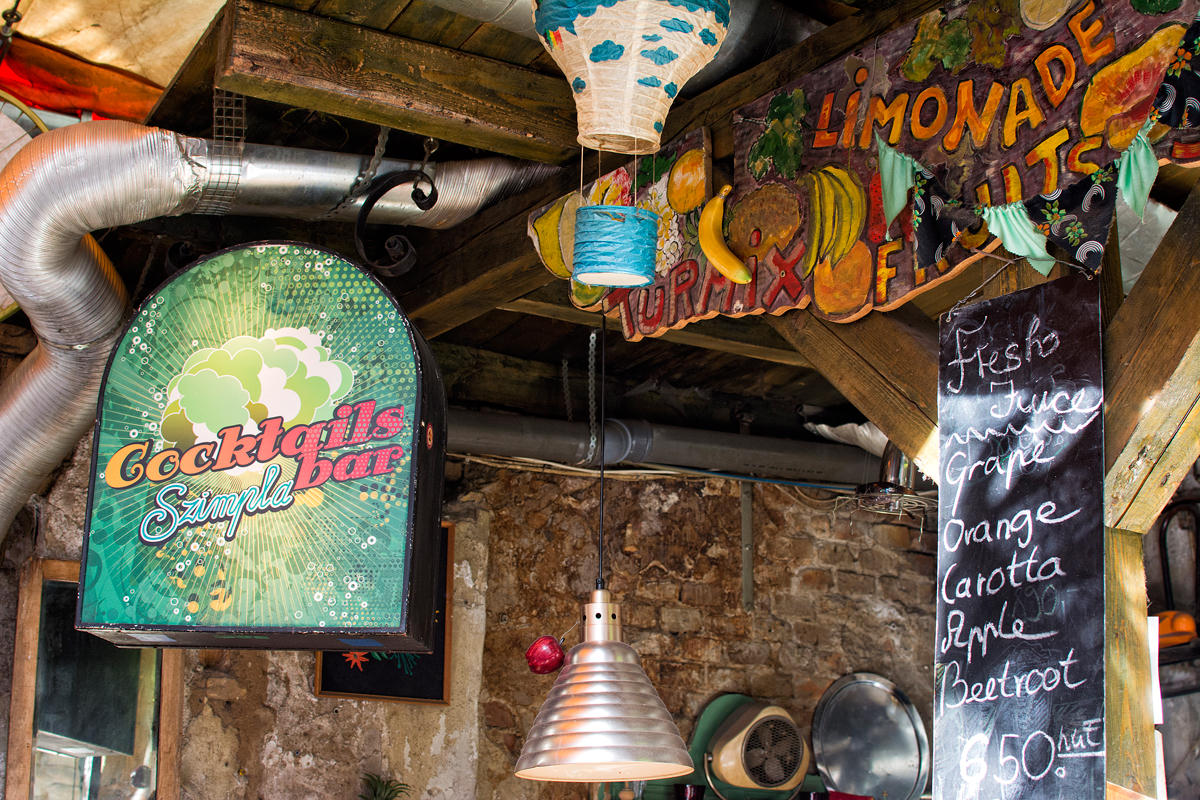 Some of the “creative” decorations in Szimpla

After getting our fill at the farmer’s market, we set off for our last stop of the day, the Great Synagogue. As Europe’s largest synagogue, it is fitting that it is so beautiful. Built in a Moorish Revival style, it reminded us of the Alhambra in Granada, Spain – a curious choice for a Jewish building. The building also has great historical importance, as it marked the border of the Jewish Ghetto during WW2 and today contains many of the torah scrolls from synagogues throughout Europe that were destroyed during the war. 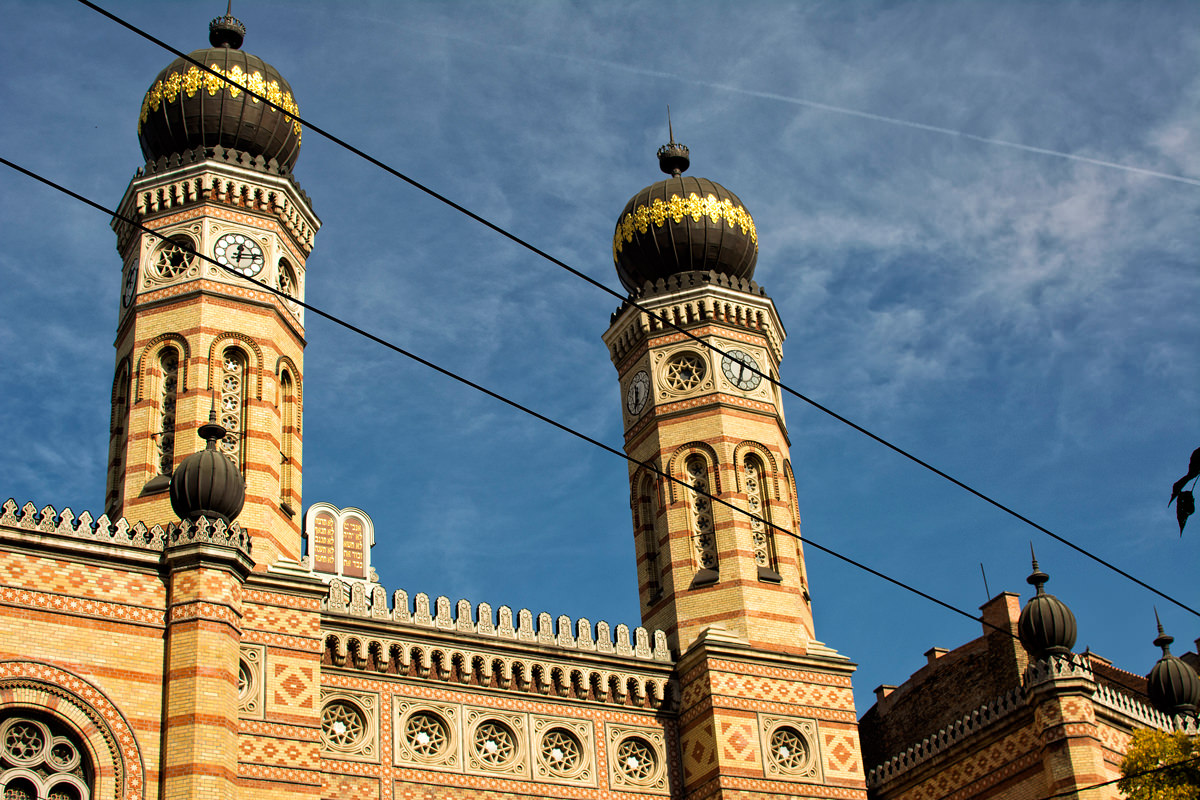 The iconic minarets of the Grand Synagogue, built in Moorish Revival Style

Unfortunately, by this point in the day our feet were aching and we were in no mood to stand in the 100-person strong line outside the doors of the Synagogue. So we just admired it from the outside while standing in the beautiful sunny weather we were being treated to.

Hopefully you are still not sick of reading about this amazing city, as we have more on the way…stay tuned!

Logistics: Andrassy Avenue is that huge street running through the middle of the city…don’t worry it’s impossible to miss. The Terror House is open every day except Monday from 10am-6pm and costs 2000 HUF (less than $10). The Szechenyi Baths are located just past Heroes Square at the end of Andrassy Ave. They are open every day 6am-10pm, and prices vary depending on time, services, etc (bring a bathing suit, flip-flops, and a towel!). The Szimpla Pub farmer’s market occurs on Sunday mornings and afternoons.