This was the phrase we uttered over and over. It was an unseasonably warm night in Belgrade, and we were at the “Eternal Derby” with over 40,000 screaming Serbians.

Often heralded as one of the top 5 most intense rivalries in the sporting world, the biannual battle between the two giants of Serbian football – Red Star and Partizan – is one of the most anticipated and heated affairs of the year. And we were lucky enough to have procured two tickets to the Red Star-hosted edition of the derby. Assured by one of our readers that we would be perfectly safe thanks to the mind-boggling police presence, we made our way to the stadium via public bus. Or that was our intention. Our bus could only make it part-way before the sheer number of people meant we had to get off and walk the rest of the way. I will admit that it was an intimidating atmosphere. Chanting and cheering fans were absolutely everywhere and we had no idea which gate to enter.

After wandering aimlessly for a few minutes, I cautiously approached an officer (who looked more like the Robocop than any police officer I’ve ever seen) and asked him if he knew where we were supposed to go. To my surprise (and relief) he answered in perfect English, and after asking some nearby stewards he directed us to our gate.

We made it in the stadium, after an obligatory search of course, just as the players were coming out onto the field. The stadium absolutely erupted – both in noise and in flames. Flares, fireworks, and other pyrotechnics went off with an inexplicable frequency, and the fans created an absolutely deafening atmosphere. Flags waved as the fans jumped up and down, creating an illusion of the stadium flexing and moving. I could literally feel the stadium vibrating under my feet. The Red Star supporters section at the beginning of the match This kid was fist-pumping ALL game!

With a rivalry that goes back to the end of WWII and reasons that go deeper than geography, the importance of these derby matches cannot be understated. And we were about to experience that in full.

The match, which honestly felt secondary at many points throughout the night, was a battle from the kickoff. A flurry of hard tackles set the stage for what was to be a furious match. While the quality has dipped a bit in Serbian football since Red Star won the Champions League in 1991, the play on the field was still great to watch. The problem was, there was just so much going on to distract us.

Even before the match had kicked off the real battle had begun between the two main supporters groups – the Delije (Red Star) and the Grobari (Partizan). Banners, chants, flares, fireworks – the fans went back and forth with everything they had. This only intensified after Red Star scored what can only be described as one of the most bizarre own goals I’ve ever seen. The Red Star fans around us were overjoyed, and the taunting towards the Partizan fans quickly began. Not much else happened in the first half and the teams left the field with Red Star leading Partizan 1-0.

If I thought the atmosphere was intense before halftime, it was about to take off into the stratosphere. After the Partizan section set off a huge number of flares just after the restart, some of their members began gathering up everything flammable they could find (all the seats had been removed before the game as a precaution) including their own clothes, and proceeded to start a number of fires INSIDE their own section. Yes, you read that right – inside their section. Where they were standing packed together like sardines! Flares set off by the Grobari just after halftime Stoked by the fans, fires multiple fires erupted in the Parizan section 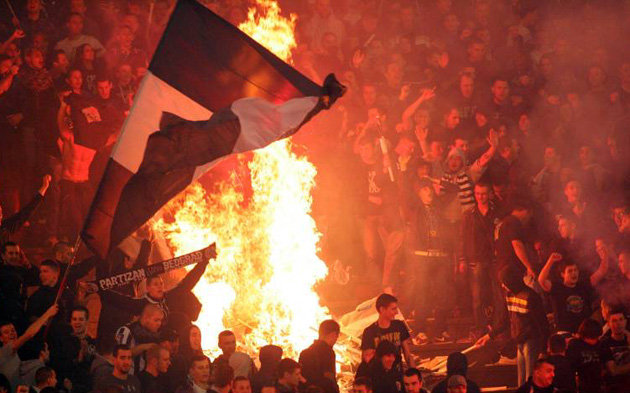 Slowly fans around the stadium began to notice what was happening. The fire grew…and grew…and grew – to the point where the referee called a stop to the match and gathered the players around centre field, away from the now massive bonfires. The police began circling the track and fire trucks were brought in to quell the fires The Partizan fans responded in turn by blocking the spray of the hoses with both banner and body – anything to keep the flames growing larger. After 15 minutes the firefighters seemed to be gaining the upper hand and the match was allowed to resume. Partizan, who had been pushing hard before the “unscheduled break” never regained that momentum and the match ended 1-0 to Red Star. Some bad blood erupted between the players after the match (probably in response to the horrendous tackle that resulted in a Red Star player being shown a straight red just minutes before the end). No one sat down during the match – who could?

The Red Star fans around us were overjoyed. Hugs, handshakes, and high-fives ensued. We (very) slowly made our way to the exit and the multitude of overjoyed fans flooded onto the street. The main street all the way back into town was completely blocked off for the cheering fans to make their way back. It was a surreal experience to be walking down the middle of a 6-lane highway with more than 40,000 other people – Calli figured this is what is must be like to be in the walking dead, just with less zombies.

So there you have it. Quite possibly the most exciting and nerve-wracking experience of our travels, and one that we will not forget. Our adrenaline was pumping long into the night and we couldn’t stop talking about the insanity we had just witnessed.

Don’t worry mother! We felt completely safe the entire time and had agreed to bail if it seemed like it was going to get out of hand.

If you want to see more pictures or videos there is a good collection of the game here. 25 Responses to "Surviving the Eternal Derby in Belgrade"