As we mentioned in our previous post, landing in Sarajevo was a surreal experience. Here we were, only a 40 minute flight from Ljubljana, yet feeling like we were in a completely different world. Mosques and minarets dominated where church spires and bell towers would normally pierce the sky. Only minutes after checking into our room, the call to prayer broke the silence of the evening and excited us for the upcoming days. The view from our window

When traveling through Europe, especially when traveling slowly and over short distances like we have been on this trip, it can become difficult to distinguish city from city. Memories of buildings and museums start to blend together, and your outlook on travel can become jaded. This was not going to be a problem in Sarajevo. 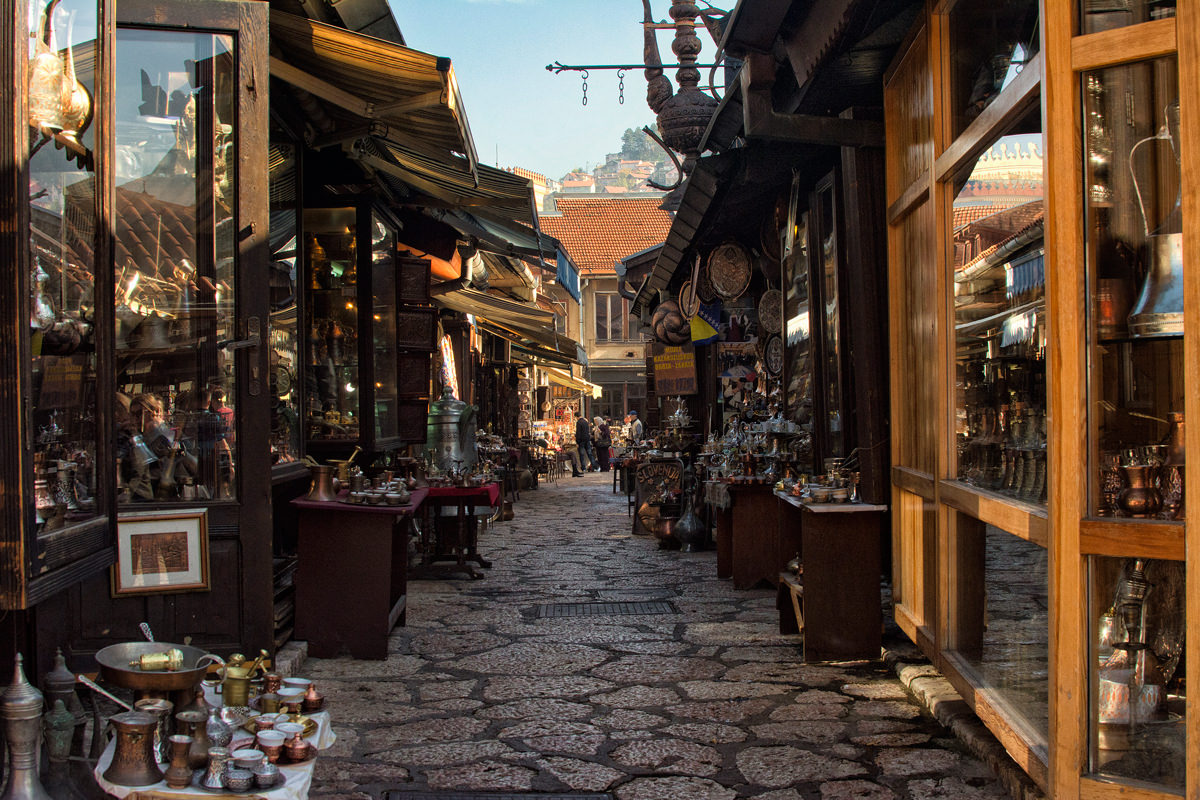 Just one of the countless narrow streets of Baščaršija

Sarajevo is an all out assault on the senses from morning until night. Dodging traffic, sampling Bosnian Cevapi and Burek, hunting for treasures in antique markets, and photographing bombed out buildings – everything in Sarajevo seemed to be an adventure of epic proportions. We began our visit in the same way we do in most cities – with a free walking tour. Our guide, the charismatic Neno (not Nemo, that is a fish), grew up during the war and mixed tales of his life during these trying times with interesting historical anecdotes. Some of the highlights included visiting the Markale Market (the sight of the biggest single attack during the siege), walking over the Latin Bridge (and the corner where Archduke Franz Ferdinand was shot – he wasn’t shot on the bridge!), meandering through Baščaršija (the old 15th century Turkish Bazaar), and witnessing hundred of Muslim men and women make their way to the Gazi Husrev-beg Mosque to pray after the call to prayer. In addition to our walking tour, we also took a tour out to the Tunnel Museum at the Sarajevo Airport. At over 800m long, the tunnel, which began in an ordinary house and burrows its way under the International Airport, was the only connection the people of Sarajevo had with the outside world. As the city was completely surrounded by Serbian forces, the Tunnel of Hope was the only way to get food, weapons, medicine, and anything else the people needed in the city during the nearly 4-year siege. The house where the Tunnel of Hope began Perhaps one of the most beautiful and heartbreaking experiences we had was or visit to Gallery 11/07/95. Set up as a tribute to the genocide that happened in the small town of Srebrenica, the gallery displays black-and-white photos and a video of the people who suffered and survived the largest mass killing since WWII (where over 8,000 Bosniak Muslims were systematically executed over 3 days). Our experience was made all the much more meaningful by us accepting one of the employee’s offer to guide us around. The photos were thought-provoking and heartbreaking – definitely a worthwhile experience. Sarajevo provided an eye-opening experience for us. Having grown up in a place where the thought of war and suffering is so foreign as to seem impossible, it was extremely moving experience to be in a place where the tangible evidence of a war that ended less than 20 years ago still remains. Bullet-holes and destroyed buildings are as common as the white headstones that blanket the hills honouring the fallen heroes. One of the cemeteries to the defenders of Sarajevo

And yet the people of Sarajevo keep persevering. Everyone we met greeted us with a warm smile – pointing us in the right direction when we were lost, giving us free strudels for breakfast, and going out of their way to make our visit to Sarajevo the best if could be.

Have you ever been to Sarajevo? What did you think about the city?

10 Responses to "Sarajevo – A World Apart"