Moving on from Lisbon, we started a week long stay in Spain’s Andalucia region with a visit to Seville. Arriving on the night bus in the early morning hours, we expertly navigated Seville’s winding streets and found our hotel without argument – a surprise considering how tired we were. After dropping off our bags we wandered back to the main square, grabbed a Starbucks*, and watched the sun come up in the presence of the town’s looming Cathedral.
It really is enormous, the Cathedral I mean. The largest in the world, by volume, we’ve read that the family responsible for funding the project actually strove to create something so large they would be thought mad. Mission accomplished as I personally can think of a million other ways to spend millions of dollars.
In addition to the over-the-top Cathedral, we spent time exploring Seville’s Alcazar, the oldest royal palace still in use in Europe. Entrance is 7.50 Euro/person but definitely worth it as the grounds and architecture are amazing. However be forewarned that the line is very long on weekends/whenever the Cathedral is closed. We lined up on a weekday morning around 9am and got in right away when it opened at 9:30am.
We also spent a lot of time wandering Seville’s streets and eventually found our way over to Maria Luisa Park and the Plaza de Espana one afternoon. The plaza, built for the 1929 Ibero-American Exposition, and surrounding park are not only lovely but also free to explore. 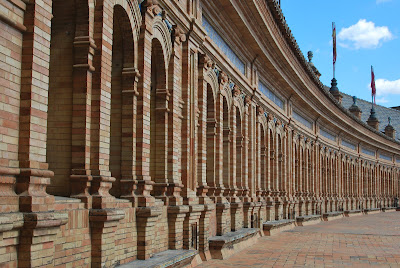 Although the Cathedral is Seville’s pride and joy, and main attraction, we were a bit disappointed with the interior, especially after paying the 8 Euro/person entrance fee. I understand that Christoper Columbus is buried there (allegedly), however I’m not sure this calls for such a steep entrance fee (we can eat an entire dinner for 16 Euro). Unfortunately, we felt a bit cheated after being charged such a large amount and then discovering the alter was covered with a tarp while undergoing 1.5 million Euro in repairs. I don’t think I’d pay to visit the interior of the Cathedral again, the exterior is the real gem in my opinion; However, it’s easy for me to say that having already been inside. In the end it’s you’re choice and hey, maybe the alter will brighten up the interior once it’s restored.
*Come on, don’t be like that, there’s really no reason to judge. Everyone is entitled to a little indulgence now and then and it was one of only a handful of places open so early.