After arriving in Brussels, via our overnight bus from Berlin, at around 7 in the morning (which thankfully was a few hours late), we were again saddled with having to find something to entertain us (and keep us awake) until we could check into our hotel. After a good experience with a walking tour in Berlin, we figured that doing something active was our best bet, and eventually settled on a self-guided walking tour of the comic murals of Brussels.

If you’ve ever been to Brussels (or anywhere in Belgium or France for that matter) you know that comics are a big deal. Bandes dessinées (literally “drawn strips”) are an integral part of book culture in these regions, accounting for nearly 20% of book sales in some areas. Throughout our trip, we’ve seen people reading comics in coffee shops, on the train, and even while walking down the street, as well as large outdoor markets catering solely to book and comic fans.

“Lucky Luke” – faster than his shadow.

Brussels, perhaps more than any other city, has embraced this comic-crazed culture and proudly offers comic themed goods in book stores, tourist shops, museums, and, as we quickly discovered, even on their walls. With almost 50 wall murals now, anyone can experience this culture with just a map and a good sens of direction.

Relying on the accuracy of this map, provided by a local tourism website, we started weaving our way through the city seeking out these large paintings. The entire walk quickly escalated into a sort of treasure hunt, as we speculated which comic may be revealed around the next corner. To our frustration at times, the murals actually blend into the surrounding buildings quite well. Who would have thought a forty foot painting could be so hard to find? 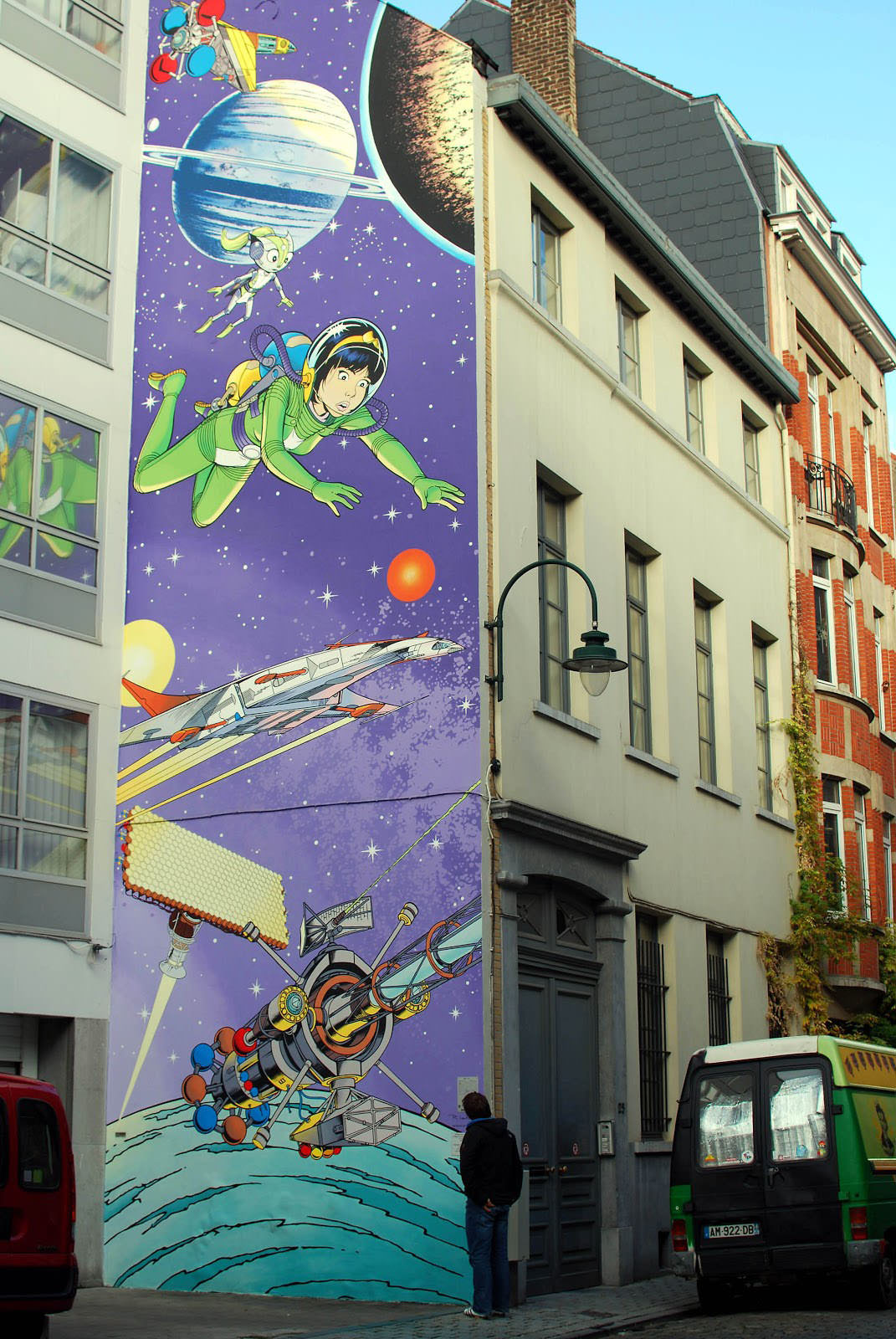 “Yoko Tsuno” – You can really see the size

“Ric Hochet” – some murals interact with the city

“Tintin” – probably the most famous mural

Not only was this walk enjoyable, and a bit exciting at times, it also provided a great introduction to the city, covering the major tourist sights as well as some outlying areas. We both agree that it was a wonderful way to see Brussels and we happened to stumble onto both the Mannequin Pis and Zinneke Pis statues as well (the first being the famous bronze statue of a small boy peeing, while the later is the lesser known bronze of a dog, also urinating).