The summer after our adventurous 4 day biking and camping trip through the Kettle Valley Railway in 2003, my dad switched gears and took my brother and I on a weekend trip to Vancouver. After some necessary back-to-school shopping we intended to hit the Pacific National Exhibition (PNE), an annual 17 day summer festival and seasonal amusement park in Vancouver. However having had enough of the crowds and noise of the city, likely to be only elevated inside the festival, we decided to take a scenic drive through greater Vancouver and explore at some of the city’s different neighbourhoods. My desire to avoid large crowds was well pronounced even as a teenager.

A few hours later, after a leisurely drive through West Vancouver and its luxurious Shaughnessy neighbourhood, we crossed the Lions Gate Bridge into Stanley Park and proceeded towards downtown Vancouver. While most of this drive has slowly faded from memory, this section is vivid and clear in my mind; as we drove our small family sedan through the city’s heart I remember staring up at the enormous skyscrapers awkwardly twisting my neck to see to the very top of these mirrored giants. Theirs was a type of beauty I’d never seen before, man made, forged from iron and steel, with modern glass exteriors that appeared so fragile, while the older buildings, constructed of dark stone and oozing elegance, caught my attention with their green hued roofs, the result of oxidizing copper. 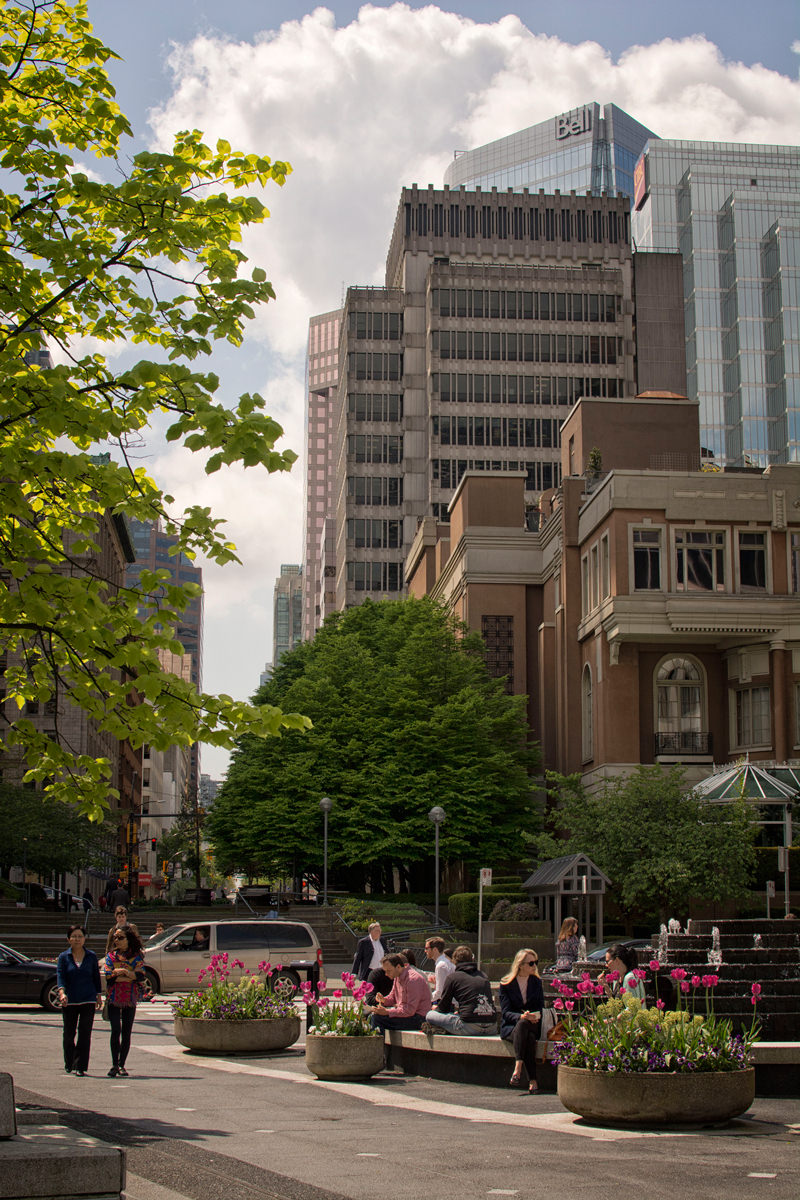 I wasn’t a naive young girl on my first visit to the big city. I had visited Vancouver dozens of times before, as well as Los Angeles and Seattle, however somehow this visit was different. Maybe it was my age, my understanding of the world, or my perspective of life at the time, but for the first time I was entranced by a city. Vancouver’s perfectly curated mix of the old and new was unlike anything I’d ever seen before and I wanted more.

Walking around downtown Vancouver earlier this month I found myself as in awe of the city as I did during that weekend drive with my Dad nearly ten years ago. Reaching hundreds of feet into the air as though completing some sort of new yoga move, the city’s skyscrapers appear to be keeping watch over the small streets below. While at street level a canopy of ornamental cherry and maple trees provide a shady canopy from the sun and (more prevalent) rain. In downtown Vancouver flowerbeds fill the spaces between office buildings, creating small patches of green space where impeccably dressed business people gather for lunch and young people sporting skinny jeans and dark rimmed glasses lounge around, their ears plugged with the white buds of an iPod tucked away in a back pocket or handbag.  Here planters overflow with colourful tulips and the scent of a nearby Magnolia in bloom mixes with that of sweet bar-b-que sauce wafting from a parked food truck. 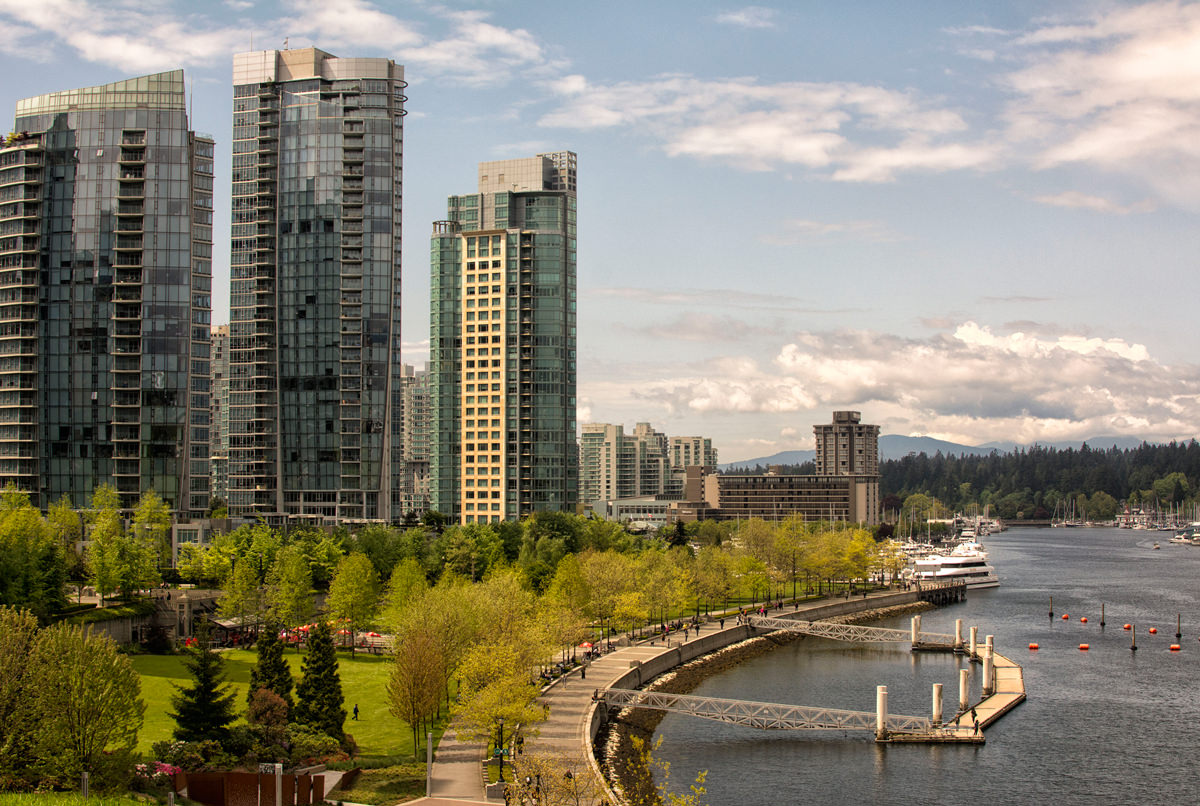 After traveling the world for the better part of a year, exploring some of the most loved and lusted after cities on the planet, I still can’t tear my eyes away from the one just hours from my hometown.

As is common in particularly beautiful cities, walking around Vancouver can be hazardous. With so many viewpoints and possible photo opportunities competing for my attention, walking became nearly impossible and I stumbled more than a few times after catching the toe of my tan moccasins on an uneven paving stone or cracked curb. Yes, I am a Canadian wearing moccasins, it’s all very stereotypical. However past the beautiful architecture, sunny views of Stanley Park from Canada Place, and planters overflowing with some of the tallest tulip plants I’ve ever seen, the city’s beauty isn’t superficial. Vancouver is a multicultural city where tolerance is exemplified and strangers smile at each other while pausing to hold the door for those behind them. 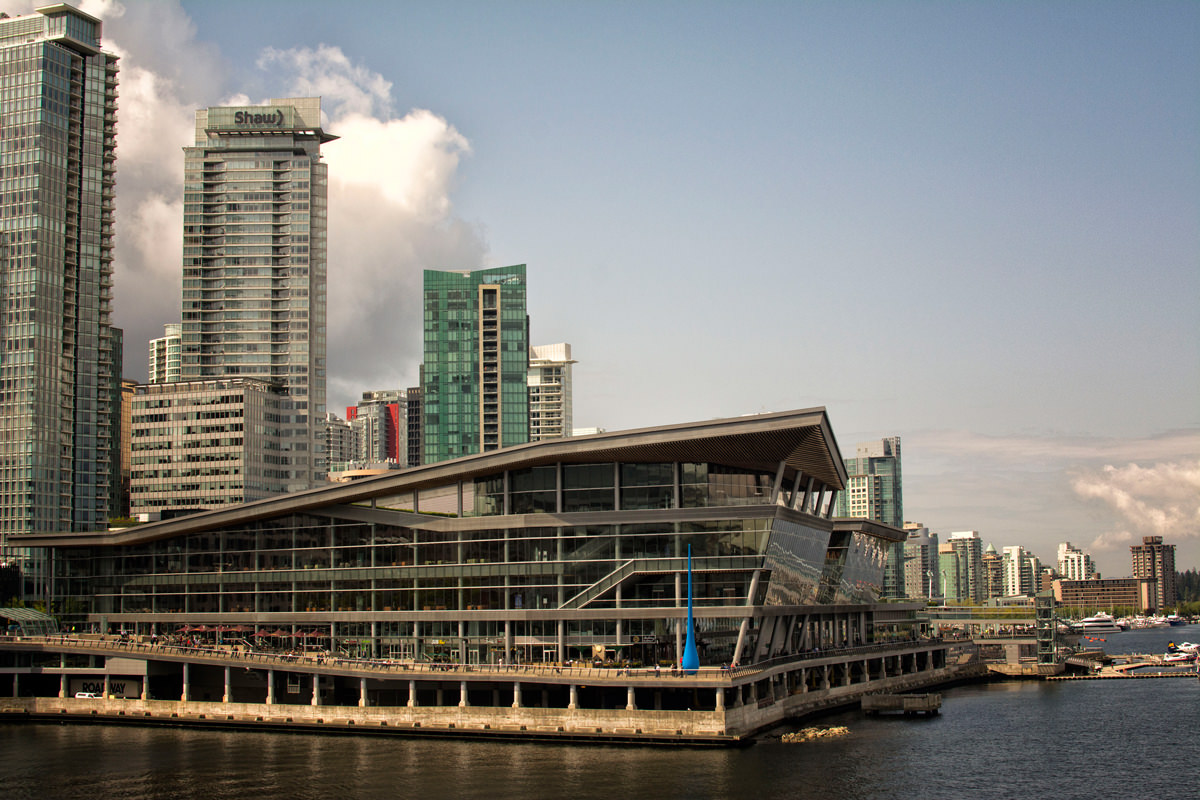 The Vancouver Convention Centre on the waterfront downtown 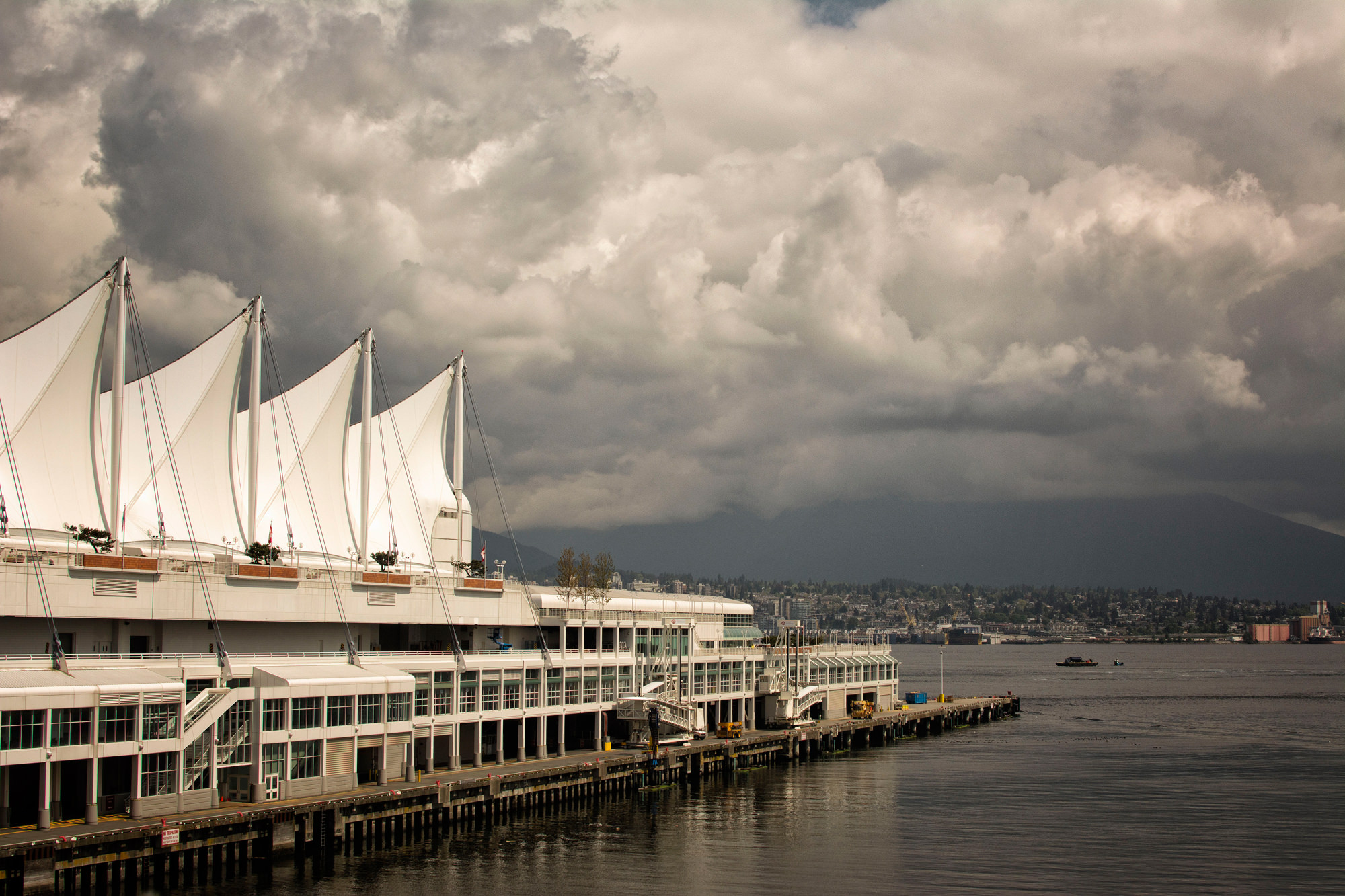 During my time in Vancouver my friend Kelsey and I even had a stranger interject while walking and talking about the incredibly delicious sandwich shop Meat + Bread. Said stranger also apologize profusely when he discovered we were headed to the new location on West Pender he wasn’t aware of yet.  Of all the countries I’ve visited, very few are home to people that will stop a stranger they think may be lost with the hopes of helping them avoid getting lost in the first place and then apologize for trying to help. It’s small things like this that make me happy to be home.

Vancouver is at its best on sunny spring days, when the air is perfumed with flower blossoms and there is a slight breeze coming off the water, however for anyone fortunate enough to visit the seasons are irrelevant. There is always something worth seeing, doing, or especially worth eating in Vancouver and there is always someone willing to point you in the right direction or hold the door open. 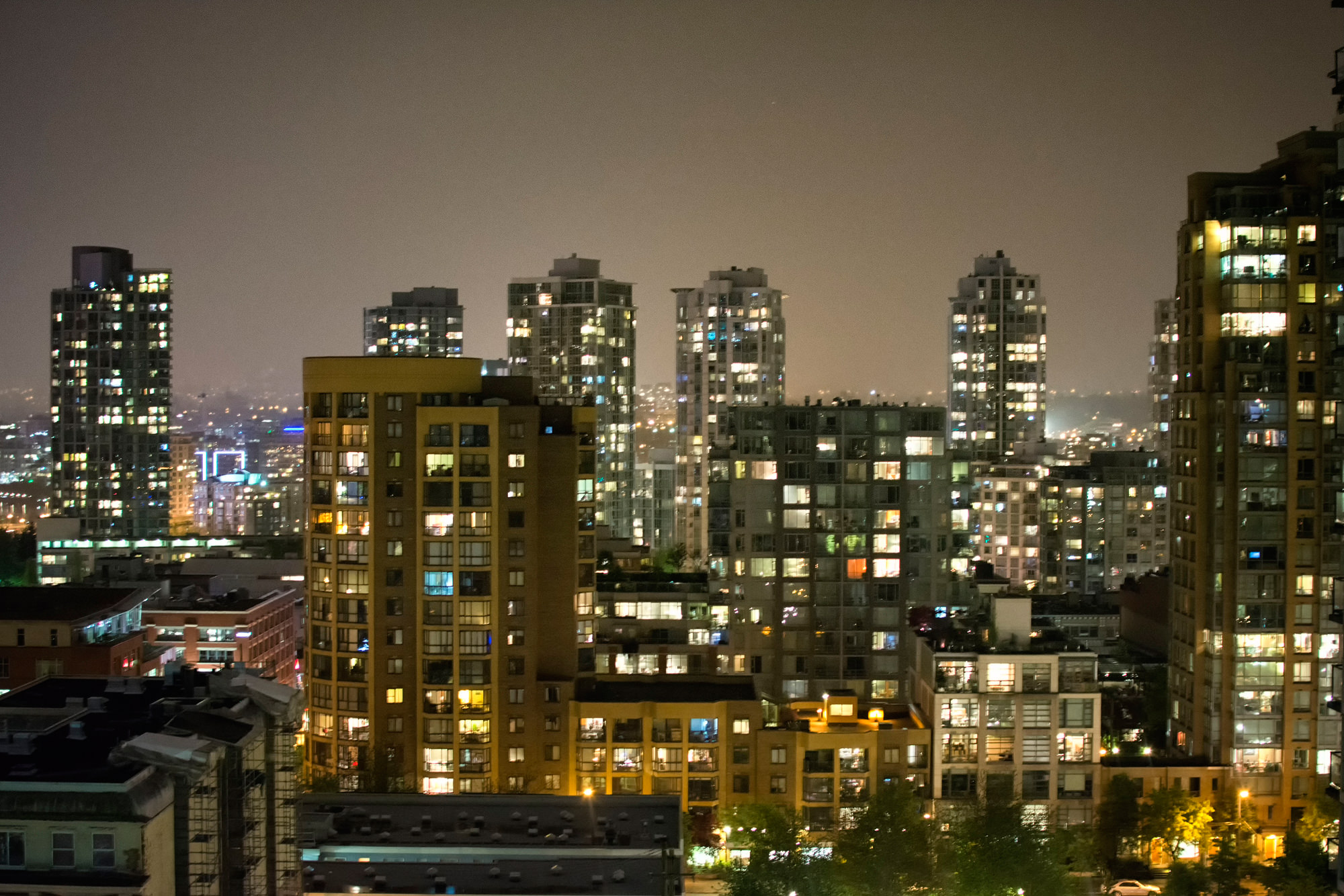 The city is just as beautiful at night

If my bias is showing I apologize. I really do love this city. However while I may have painted a picture of Vancouver that seems too good to be true, a Disney-esque type of fantasy land, this isn’t the case.  The city does have its share of problems, homelessness likely being the most evident to tourists, my first-hand positive experiences in Vancouver far outnumber any negative ones and I really do think it’s one of the friendliest (and prettiest) cities I’ve ever visited. Also, I guarantee you’ll find far fewer crying babies in Vancouver than Disneyland.

54 Responses to "Getting Reacquainted With Vancouver, BC"